Italy’s motorway operator, Atlantia, were delayed to the market opening this morning eventually opening over 21% down on yesterday’s share price. Later in the day trading was suspended on the stock. As we write, 39 people have lost their lives and emergency responders continue to sift through the debris with the sickening prospect of encountering more loss of life doubtless weighing heavily upon them.

Large scale structural failures like this always sharpen the focus of civil engineers. Civil society also feels it. Notwithstanding the tragic loss of life, bridges are powerful symbols of endeavour & achievement and emblematic of a city’s status and character – just ask anyone from San Francisco or watch the Scotsman’s jaunty pride when discussing the Forth Rail Bridge or the new Queensferry Crossing. The aesthetics of the Morandi Bridge in Genoa certainly divided opinions over the last 50 years but its loss wounds the city, measured in loss of human life rather than any monetary sum of repair or remedials.

There is, however, broader concern. The Morandi Bridge is of reinforced concrete construction with prestressed concrete tendons as cable stays – a bit of a variant on normal cable-stayed construction. Riccardo Morandi, the designer, was a proponent of this type of bridge construction – there are relatively few of them worldwide. While it’s understood that works were on-going at an adjacent bridge pier at the time of collapse, Engineers’ focus will be less fixed on the conceptual arrangement of the bridge and more on the condition of the reinforced concrete structure itself. Reinforced concrete, probably civil engineering’s greatest innovation, requires maintenance. Fingers were immediately pointed at Italy’s maintenance budget and maintenance provider Autostrade per l’Italia (of whom Atlantia is the holding company). So, are there deficiencies in Italy’s maintenance budget? The answer is a resounding “no” – we’ve extracted some data from the OECD and reconciled Italy’s road maintenance spend per kilometer of road network (it should be noted that measures of maintenance budget are quite distinct from new infrastructure investment and, also, measure versus GDP or other economic parameters are a bit spurious – our view was that the maintenance budget ought to be a function of the size of the asset, i.e. the length of the road / motorway network, hence cost per km of road). The chart below, admittedly without data from Spain and Germany for whom the OECD doesn’t carry these particular data, shows that Italy’s spend vastly exceeds the EU average. More broadly, on a total budget basis, only the United States’ and Japan’s road maintenance budgets are in excess of Italy’s in the group of OECD countries. In fact, Italy’s spend on road maintenance has typically been €2bn to €5bn more than Canada’s over the last 20 years. In 2015, Italy’s road maintenance budget was just over €9bn and, for contrast, Britain’s was slightly less than €3.2bn. 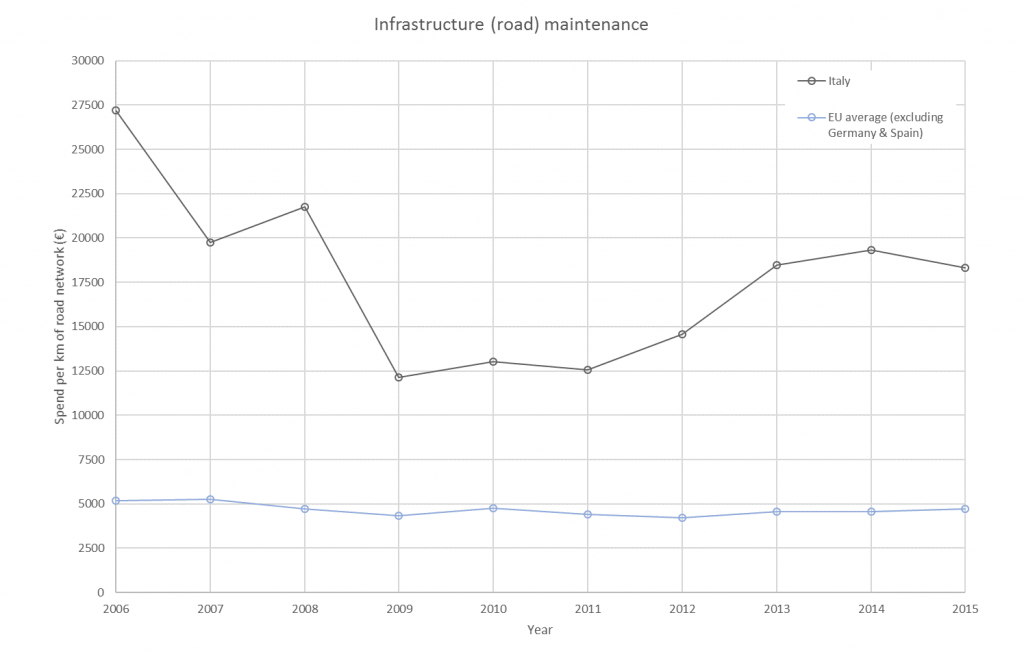 The next question then is whether of not Italians been getting value for their spend? It’s here that the investigation needs to focus. Italy’s road maintenance operations, like most of Europe, are undertaken by private operators through concessions. This is in contrast to the US where state and federal operators manage infrastructure. Is privatisation of this facet of infrastructure development appropriate? Is greater governmental oversight of private operators needed? That’s not to say that the federalised American approach has statistics to be aspired to – almost 9% of bridges in the US are “structurally deficient” according to the ARTBA. To put that in context, that would equate to roughly 174m vehicle movements per day over bridges that have been categorised as structurally defective.

Another question that arises centres on the age of the infrastructure. A lot of US infrastructure was constructed towards the end of the Great Depression. Italy’s infrastructure would be older in the European context (as would Germany’s and Britain’s) – the bulk of the road & motorway network being constructed in the 1950s & 1960s. By contrast, Spanish and French networks were constructed largely in the 1970s & 1980s and newer, developing EU countries have infrastructure less than 20 years old. The vast majority of newly built infrastructure has a design life in excess of 100 years – is this realistic? Is the Morandi bridge, being just over 50 years old, a test case high-end reinforced concrete construction and should we be tempering design life aspirations for it?  Is there more of an exponential (rather than linear) relationship between maintenance cost and age of the infrastructure?

These are the questions that need answering and the importance of the Morandi Bridge forensic investigation cannot be overstated. It will have implications for the assessment of civil infrastructure for decades to come. In the meantime, our view will be focused through the prism of 39 lives lost.